Nobody’s perfect, just ask the US Embassy in Australia. Last week, they sent out an email containing an image of a cat dressed in a Cookie Monster costume holding a plate of cookies.

While the subject line read, “Meeting,” the email contained an RSVP tab for a “Cat pajama-jam Party.”

It wasn’t said how many people received this hilarious email invite, but once word broke on social media, users were hellbent on making the embassy host the promises feline fiesta. 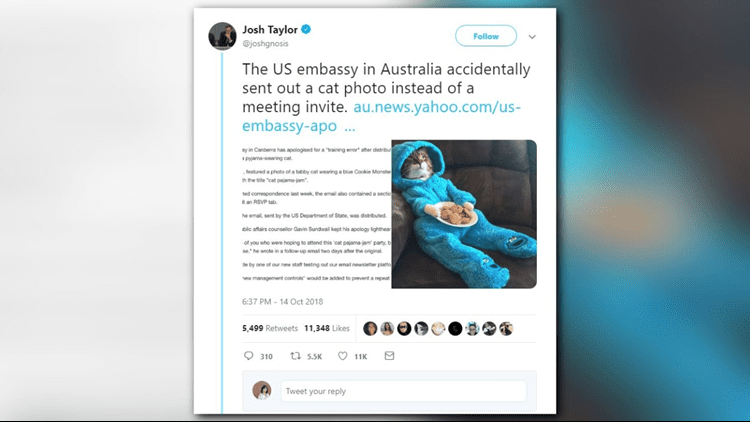 The cat, whose image was used in the email, even expressed his desire to attend the pajama party and was unfortunately disappointed when the embassy admitted it was simply a mishap.

Gavin Sundwall, the embassy’s public affairs counselor said,Â “Sorry to disappoint those of you who were hoping to attend this ‘cat pajama-jam’ party, but such an event falls well outside our area of expertise,” he wrote in an emailed statement.

A little disappointed that it was canceled, but also @USAembassyinOZ … we never received an invite?! We may have to host! ðŸ˜ºðŸŽ‰ pic.twitter.com/kXsgqqPrXi

Though it was a mix-up, the Twitter world has had a lot of fun with the embassy’s mistake.