This Lizard Has His Own 134-Page Cookbook

Have you ever wondered what a lizard could do in the kitchen? No? Well, either way, one-year-old bearded dragon Lenny has debuted his book, Chef Lenny: Cooking for Humans.

The cookbook was the brainchild of Lenny's human, chef and lizard-lover Valerie Musser. "It was my quarantine project," the mother of three said. "I'd been writing a cookbook for about 10 years but never really had the time to sit down and sort through it."

In quarantine, Musser was unable to operate her small catering business. Instead, she found herself with an excess of time. She bought Lenny a tiny chef's hat from Etsy, and the rest is history. 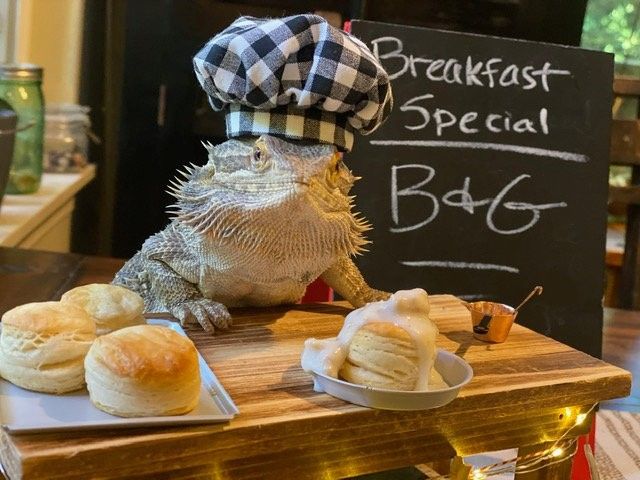 "He actually loves wearing hats and posing for photos," she said, "so I started making miniature food for him to show off with."

At first, Musser posted a few pictures of Lenny "cooking" on Instagram, and people soon began to share how much they enjoyed them.

"... The feedback was so positive, people were writing things like, 'this made my day' and this really cheered me up,' so I realized that people actually needed this," Musser continued.

The 134-page cookbook is available on Etsy and Amazon with the option of adding bespoke dietary alterations upon request.