It’s been almost four decades since the Flyers last won a championship, so the team is more than just annoyed. Thankfully, the Wells Fargo Center has just installed it’s first “Disassembly Room” for fans. The concrete cell will be a haven for frustrated fans to unleash their inner anger in a safe and contained environment. And of course, it’s Gritty tested and approved.

The Flyers are excited to induct the first-ever room of it’s kind for any US sports arena. In a press release, the Flyers explained that the cell was meant to channel the “well-known passion of the Philly sports fan” into something safe and fun. People can book the room with scheduled sessions. 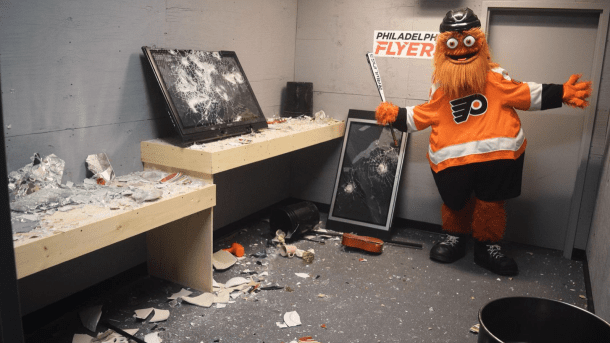 The room is the second new installment to the arena, the other being the Gritty C.O.M.M.A.N.D Center. Here, fans can be “grittified” by professional stylists and artists. They’ll receive makeup, costumes, orange hair dye, and face paint. They even have something called “Grit Powder.”

The Flyers opened up Gritty’s Command Center. You can get your hair dyed and face painted. And powdered! pic.twitter.com/ZBuLWyr9iz

Tickets for the rage room are #35 for a single and $60 for a couple’s booking. Each person gets 5 minutes of pure, uninterrupted raging against the game. Grab a sledgehammer and get hacking away, Philly fans!