Sunny, a yellow lab, is the TODAY show’s puppy with a purpose… and boy, does he have a purpose.

Sunny is a guide dog by trade, who began his life of stardom on the TODAY show. Now, he’s landed himself a new gig that’s got many sports fans green with envy. 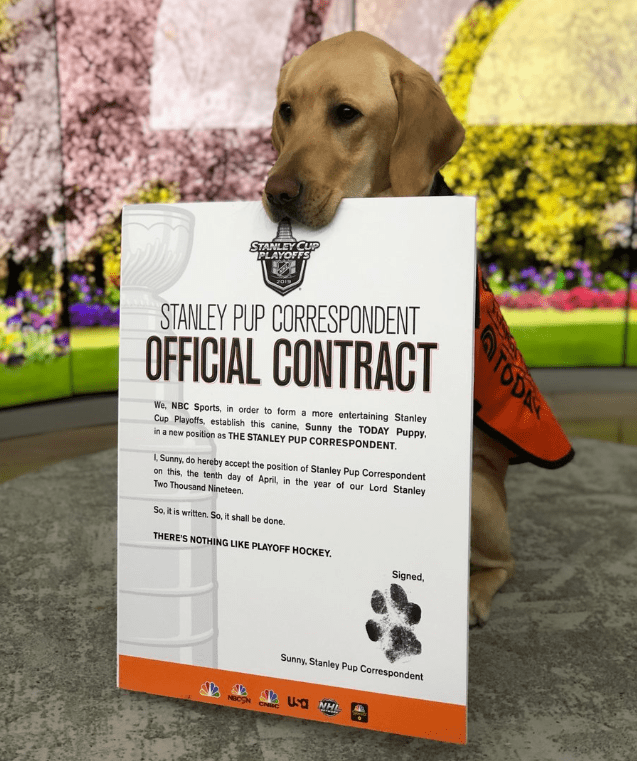 This “good boy” has been named NBC Sports new “Stanley Pup” correspondent for the NHL playoffs.

We’d like to formally announce that we signed the @TODAYPuppy, Sunny, to a contract to become our Stanley Pup Correspondent for the Stanley Cup Playoffs!@TODAYshow | @GuideDogFdn pic.twitter.com/Et22Wze1tB

To seal the deal, he stamped his paw on an official contract that stated, “I, Sunny, do hereby accept the position of Stanley Pup Correspondent, on this, the tenth day of April, in the year of Lord Stanley Two Thousand Nineteen.”

Our @TODAYPuppy has a new job â€“ the Stanley Pup correspondent for @NHLonNBCSports! #StanleyCup pic.twitter.com/p44gHaoWsd

It’s a big job, but for Sunny, he takes it all in stride.

Look out for him on NBC Sports as he fills us in on all things playoff hockey.