JetBlue to the Rescue—Crew Saves French Bulldog on Flight

Flight attendants came to the rescue of a French bulldog on a JetBlue flight last week. The little dog was struggling to breathe while onboard, and a pair of flight attendants were credited with saving the dog’s life.

While travelingÂ from Orlando to Worcester, Massachusetts, Steven and Michelle Burt noticed that something was wrong with their 3-year-old French Bulldog, Darcy. 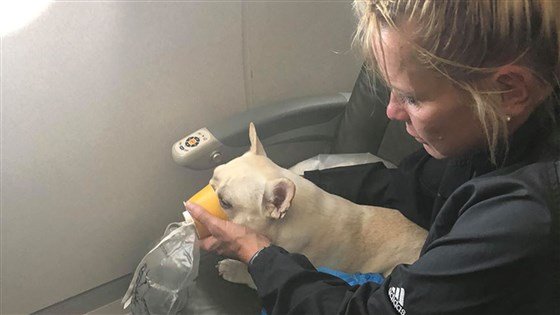 When they tookÂ her out of her carrier, her tongue and gums were blue, a sign that the dog was in respiratory distress.

They alerted the JetBlue attendants who quickly provided a small oxygen mask for Darcy, saving her life.

Posted by The Everyday Jumpseater on Friday, July 6, 2018

Michelle wrote a Facebook post thanking the JetBlue team after the ordeal, saying,Â “We all are affected by cabin pressure and oxygen fluctuations, human, canine and feline, etc., but the fact that the Attendants were responsive and attentive to the situation may have saved Darcy’s life.”

Darcy has made a full recovery, and Michelle said the couple will now check with their veterinarian first before bringing the dog on any future flights.