Jeopardy! fans have been watching Amy Schneider in awe for the past 40 episodes. All great things must come to an end, but it's sure sad to see them go!

Schneider headed into "Final Jeopardy!" with a $10k lead. Tragically, she failed to get the correct answer. Contestant Rhone Talsma, a librarian from Chicago, answered it correctly. Schneider ended up with $19,600 against Talsma's $29,600.

"I thought Rhone was going to be tough going into it," she said in a news release. "I loved hanging out with him, we had a great conversation before the taping, but I could tell that he was here to play and that he was going to be good. I still came very close to winning, but I did feel like maybe I was slipping a little bit. And once it was clear that he was fast on the buzzer, I knew it was going to be a battle all the way."

Schneider's reign came to an end and she walked away with $1,382,800 in her pocket. She is now ranked number four on the list of regular season winnings. She reigned as champion longer than any player, aside from Ken Jennings with a whopping 74 wins. She is also the woman with the highest winnings ever and the highest number of games won ever. 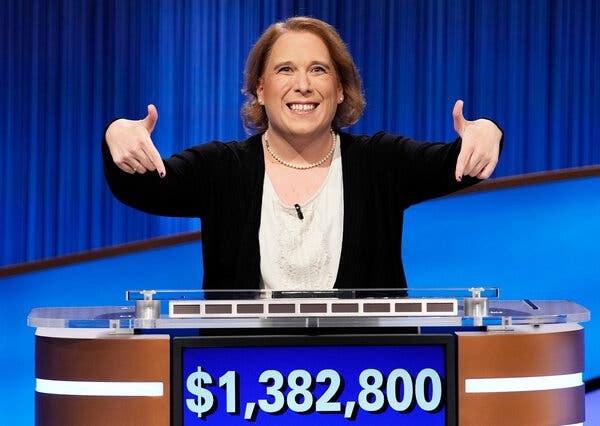 "It's really been an honor," she said. "To know that I'm one of the most successful people at a game I've loved since I was a kid and to know that I'm a part of its history now, I just don't know how to process it."

Scheider will be heading back to Oakland, California with a lot more money and a lot more adoration than she left with.