A 24-year-old was going through photos from her childhood when she came across a very familiar face. In the photo, you see adorable little Bria Madrid with an older teen dressed up like Baby Spice at Madrid’s first ever concert, The Spice Girls.

At a closer look, Madrid realized that wasn’t just any other teen that was kind enough to pose with the 5-year-old. That was the Blake Lively! TheÂ Gossip GirlÂ actress that made a name for herself for her acting in the series as well as other roles in the moviesÂ Savages andÂ Green Lantern.

Apparently, Lively was a superfan of the girl group and nailed this Baby Spice outfit!

Found a picture when I was 5 at my first concert. #SpiceGirls and took a picture with a girl dressed up as Baby Spice who I just realized now was @blakelively pic.twitter.com/GN6AW9fg0e

Madrid ended up giving an interview with TODAY Style and could easily recall the photo being taken. “I remember (Blake’s) reaction – she was like, ‘Oh my God! Of course!’ And I was like, I’m taking a picture with Baby Spice.”

Apparently, Madrid thought Lively was the real deal! Even though the actress is no Spice Girl, she does have a fabulous career that still makes this photo extremely special! Who doesn’t loveÂ Gossip Girl? And if you don’t (somehow), she’s also married to the hilarious Ryan Reynolds and their relationship is as adorable as it is hilarious. You can’t not admire the woman!

Lively caught wind of the photo and posted it to her Instagram.

Pretending to be someone else… since 1997 (Thanks @briaaamadrid for the photo of us at the Spice Girls concert. Sorry -not sorry- I tricked you into thinking I was @emmaleebunton)

We’re sure that Lively was just as excited to see this photo as Madrid was! This outfit was adorable. The 90’s nostalgiaÂ is real.

To top it all off, Emma Bunton, also known as Baby Spice, commented on the photo! This left Lively with a huge fangirl moment. 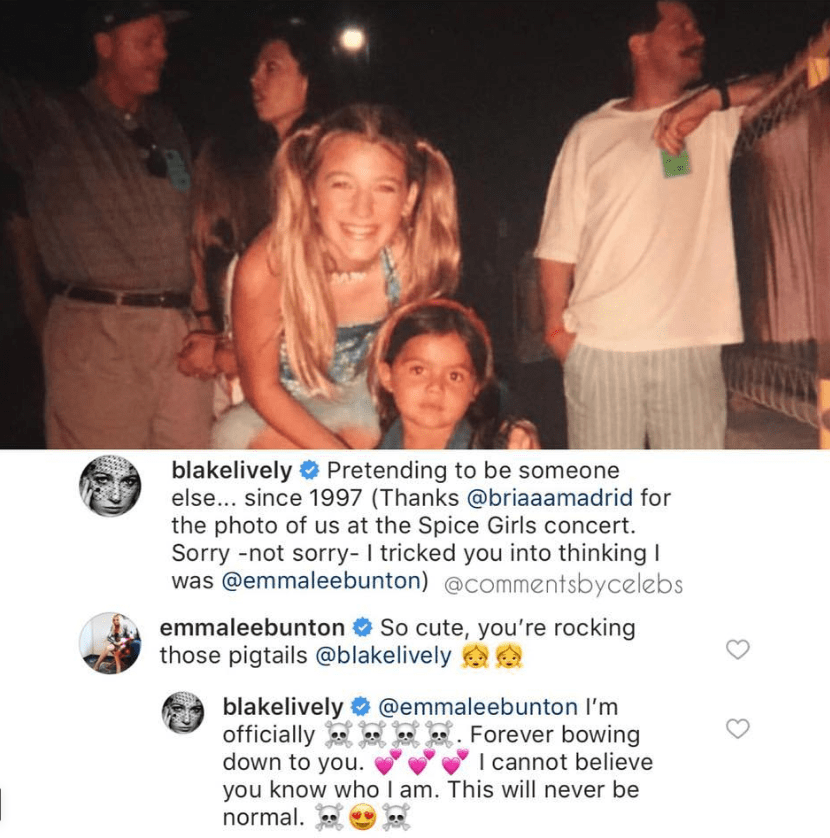