William Shatner Becomes the Oldest Man To Travel To Space

William Shatner (or better known to some as Captain Kirk) became the oldest man to travel to space thanks to Jeff Bezos' Blue Origin commercial space flight.

Shatner, along with four other passengers, took off to the edge of space, known as the Kármán line, which is 62 miles above Earth. They traveled on Blue Origin's New Shepard 4, which is about a 10-minute flight.

Glen de Vries, a co-founder of the medical research platform Medidata Solutions, and Chris Boshuizen, a NASA researcher turned tech entrepreneur, were also onboard the flight.  Blue Origin's VP of mission and flight operations, Audrey Powers, tagged along with the group. Shatner was an invited guest of Bezos' while de Vries and Boshuizen paid $250,000 each to board.

Shatner was extremely emotional after he exited the ship, saying, "Everybody in the world needs to do this... It was so moving." He said to Bezos, "What you have given me is the most profound experience. I'm so filled with emotion about what just happened. It's extraordinary. Extraordinary." 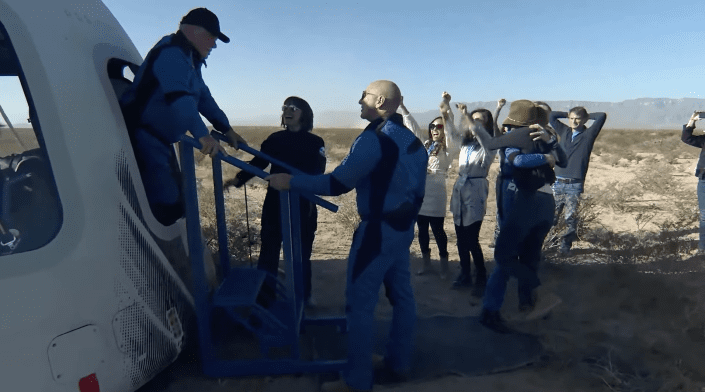 The world can't possibly think of a more deserving person for this exclusive invite. Shatner originated the role of Captain James T. Kirk for the Star Trek TV series in 1966. He then appeared in seven Star Trek movies, including Star Trek V: The Final Frontier, which he directed.