Victoria Woodhull got lost in history for a brief period of time, but her story is arguably one of the most important, and traditionally American, there ever was.

Victoria Woodhull isn't a common name in American history nowadays. But, at the turn from 1800 to 1900, she was an incredibly important person for modern feminism.

Woodhull was a pioneer of the suffrage movement and she achieved success that was extremely uncommon for a woman of her tax-bracket at the time.

She and her sister opened a brokerage house on Wall Street, printed a newspaper that was focused on women's rights, and even ran as a presidential candidate for the Equal Rights Party in 1872. 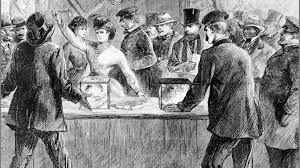 Before she became a symbol of modern feminism, Woodhull had a very successful career as a "financial psychic."

As a child, Victoria Woodhull showed a keen interest in the spiritual side of things, and she regularly tried to communicate with the dead. She knew that this wasn't necessarily physically feasible, but she learned how to put on a seriously good show after a long period of practice, and she was able to scam finance morons into paying her for tips.

As it turns out, Victoria Woodhull just understood financial markets. She was intelligent, witty, and completely on top of her game.