No matter how busy the Taco Bell in Camillus, New York gets, Kelly Stewart always sends customers on their way with more than just their meal.

The 27-year-old employee has worked at Taco Bell for about four months now, but in that time, she has hand-written hundreds of inspiring messages and quotes on the back of her customers’ receipts. 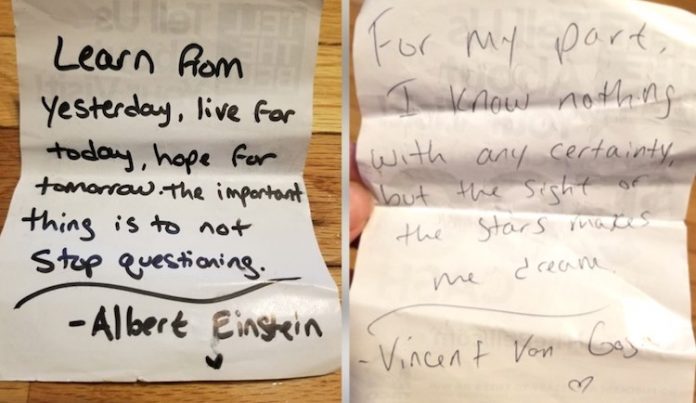 One customer said that she recently discovered a note from Kelly after leaving the location and saidÂ “I got this message that said ‘when you reach the end of your rope, tie a knot around it and hang onâ€¦’ It made me stop in my tracks and smile. Knowing someone took time out of their work or life to write this is another example that there are still good people out there.”

Stewart has said she began this little act of kindness about a month ago and customers have certainly noticed. Some have even begun to call Taco Bell’s corporate office to let them know about the good samaritan they have working at their local restaurant to hopefully reward her for going beyond the call of duty.

While Stewart has received plenty of attention for her notes, she said she just did it to make people happy and to be a good role model for her 6-year-old son.

“I may just work at a fast food place, but you have to take pride in what you do,” Stewart said. “Especially with how hard today’s times are, it’s nice to put a smile on someone’s face.”