Dog Saves Himself from Dognappers When He Alerts Pet Store Clerk

When Vango, a 5-month-old Australian Shepherd from Gatineau, Québec, entered Au Royaume des Animaux, a local pet store, he was acting out and barking like crazy. Yves Jodoin, an employee and dog trainer at the shop, was suspicious of the situation, particularly when the couple didn't know the dog's age, what kind of food he liked, or how much they paid for him.

Yves told CBC, “The dog was barking, the dog was poking and he really wanted my attention. They were evading the questions. I was giving the dog cookies, but the dog was still barking."

Yves distracted the couple while his co-worker searched online for missing dog reports, and there online, they spotted Vango, a missing notification from just 2.5 hours prior. Then, it all clicked for Yves—Vango had taken obedience classes at the store in the past.

“At that point, I said, 'Vango, come!' And the dog was reacting, he was jumping," Jodoin said. "All along he was barking and poking, trying to say, 'Hello, I’m not the dog they say I am.'" 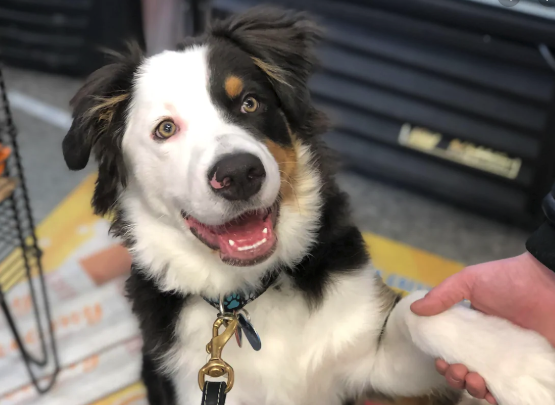 The dognappers claimed they found Vango in the woods that day and that they planned on keeping him as a service dog because she couldn't afford a trained canine. Reluctantly, when Yves told them he knew what was going on, she handed the dog over to him and he quickly called the dog's real owner, Josée Francoeur.

Francoeur suspected that Vango had been stolen because she had let him out to pee and within minutes, he was gone. She frantically began posting online and contacting her local authorities. Vango wasn't microchipped, but now that he has been reunited with his owner, they have an appointment set up for it.