Paul Rudd Dressed Up as Weird Al Yankovic For Halloween

Paul Rudd is America’s favorite celebrity, maybe only challenged by the funnyman himself, Weird Al. Well, the two finally come together in Rudd’s hilarious Halloween costume. The actor donned a curly wig and colorful Hawaiian shirt, as well as Al’s signature accordion, albeit Rudd’s is much smaller. 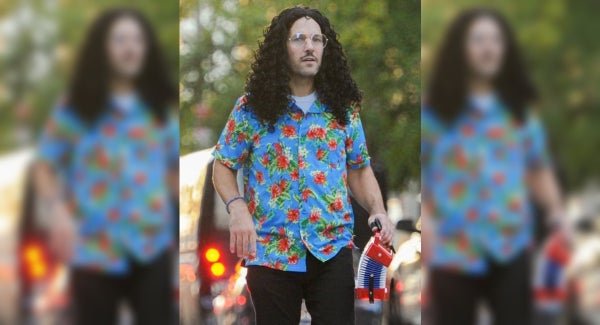 Rudd was out with his daughter Darby for the festivities. The father-daughter combination was pretty funny, and not just because of Rudd’s stellar Weird Al costume. Darby opted for a rather unrelated costume, emphasis on unrelated…

Imagine. She's got her Avengers candy bag. She's dressed up as The Wasp for Halloween, escorted by her father, Paul Rudd, who played Ant-Man, in the actual blockbuster film, Ant-Man and the Wasp.

But he's decided to go as Weird Al Yankovic pic.twitter.com/cV08EtIGye

Darby decided to go as the Wasp for Halloween. This is very on-brand for the family, as the Wasp is the sidekick of Ant-Man, a role that Rudd took on in the Marvel Universe. However, a Weird Al and the Wasp might be the next hit blockbuster!