Getting some new ink is always pretty exciting. UnfortunatelyÂ for NBA players, things can get sort of tricky when it comes to getting some ink. There have been issues in the past with the league about certain tattoos, but the most talked about aspect is getting branding on your body.

This debate is rearing its head in lieu of JR Smith’s new tattoo: the Supreme logo taking up the entire back of his calf. The NBA were not happy campers.

The NBA threatened the Cavaliers player with a huge fine if he didn’t cover up his tattoo for every game. Meaning, if he doesn’t cover it up, he will have to pay out a huge sum of moneyÂ every single gameÂ the tattoo is visible.

JR Smith got a Supreme tattoo. He now says the league has threatened to fine him each game he doesn’t cover it. The NBA has long contended they own the athlete’s skin while on the court. Been that way since Rasheed tried to get a Nestle tattoo in 2001. pic.twitter.com/vSjovZnGeU

Things are even starting to get a little messy. Now, people are questioning why players aren’t fined for wearing other brands with obvious branding on their gear, such as Nike or Jordans. People are also starting to believe that the NBA may be too involved with their player’s autonomy. On the other side, it makes sense as the NBA isn’t partnered with these brands and they could be at risk for copyright infringement.

Either way, Smith is less than pleased. 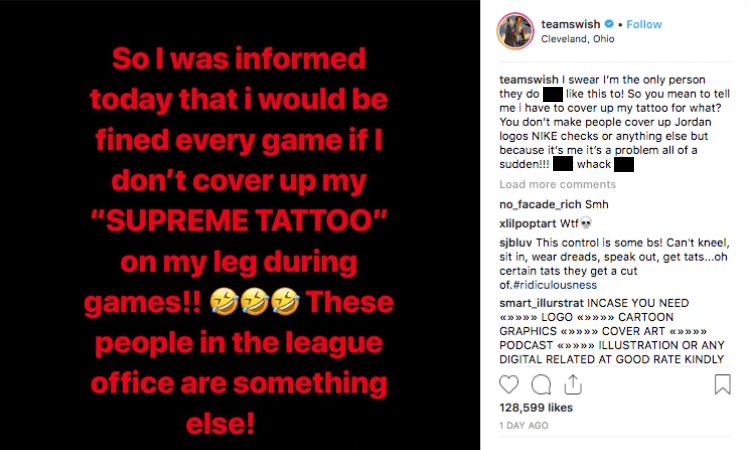 Although it does make sense, some people think it’s overstepping boundaries. NBA official rules forbid players from advertising logos on their bodies during the games, and Smith’s tattoo does just that.