Standing 6’9″, Brady is a sophomore at the University of Oklahoma and has embraced the daily comparisons he hears to Celtic’s great, Larry Bird.

In fact, Brady seems to enjoy his doppelgÃ¤nger status. In February he was sporting a buzz cut, but when the comparisons came rolling in, he grew out his locks and retweeted a photo adding, “Just a boy and a dream.”

Manek is making his own waves in the Big 12, too, proving his looks aren’t the only thing worthy of comparing to Bird. 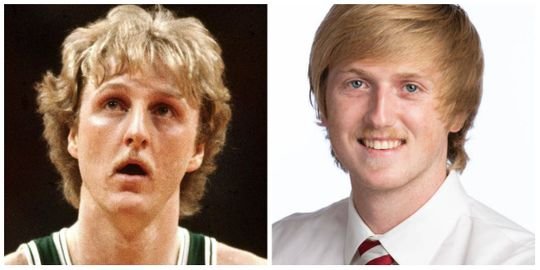 His freshman year he averaged 10.2 points and 5.2 rebounds, (ninth among Big 12 freshman and fourth for Big 12 freshmen, respectively). He was .383 from three-pointÂ range with 59 3-pointers made, the fourth most ever to be made by an Oklahoma freshman. He was also one of three Big 12 freshmen to average more than 10 points and 5 rebounds.

So clearly Manek’s got the shooting skills to give Bird some competition. Now we just have to be patient and wait for the pair to take a real photo together to break the internet.