Back in 2011, Dr. Kwane Stewart began his mission to help the homeless community take care of their pets.

When the recession hit he was shocked and saddened by the number of surrenders his clinic was seeing as people were losing their homes and opting to give their pets up. 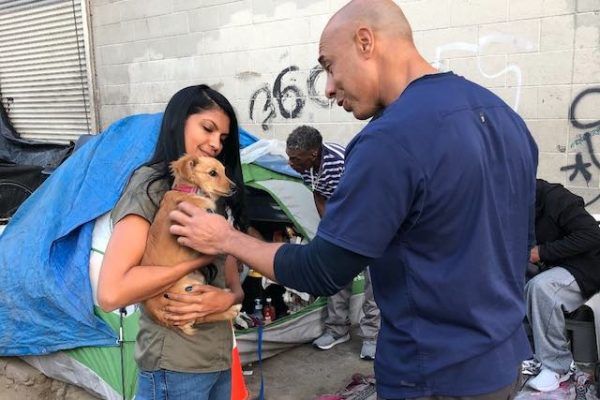 It was then that Dr. Stewart decided to set up a table at a local soup kitchen so he could treat some of the homeless pets.

“About 25% of our homeless population own a pet, and I knew that if I set up a table at a soup kitchen I could help a small group of animals,” Stewart told GoFundMe. “So that’s what I did. I called over anyone who was holding their pet and told them I’d take a look and vaccinate or treat their pet if I could.”

After treating 15 animals on that first day, he knew what he was meant to do. Ever since that day, Dr. Stewart has treated over 400 animals by wandering through alleyways and city streets and locating the homeless and their pets in California.

Dr. Stewart has a GoFundMe campaign set up to help offset costs for tougher cases. Since starting it in September, he has raised $29,000 towards his mission and was named the GoFundMe Hero of February.