A kind gesture at the Las Vegas airport made a viral impact recently.

Former Marine, Kevin Armentrout, was waiting for a plane to San Diego with his 16-month-old daughter, Carter, earlier this week.

As the little girl made friends and said hello to the other travelers at the gate, she walked over to one man who reached out and asked if she wanted to sit with him. 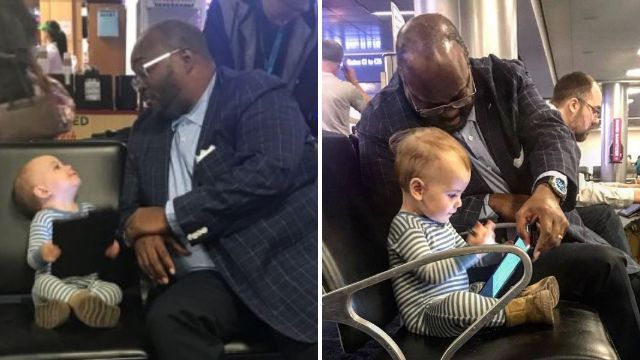 For almost an hour, Carter sat with Samsung sales manager, Joseph, who took the time to show Carter how to draw pictures on his tablet, watch cartoons, and shared snacks together.

“Watching them in that moment, I couldn’t help but think, different genders, different races, different generations, and the best of friends. This is the world I want for her,” wrote Armentrout.

Last night, while waiting to board our plane, @_carterjean_ was being her usual inquisitive self wanting to meet and say…

Armentrout went on to say that he wants his daughter’s life to be filled with moments like this.

Since he shared the poignant moment on Facebook, it has been shared over 100,000 times, proving that in a time that feels so divided, it’s the smallest of moments that have the largest impact.