For elementary schoolers, lunch is the most important meal of the day. When 7-year-old Pearl opened her lunchbox this week and saw a hummus sandwich, she knew she had to take some serious action. She also refused to eat the aforementioned sandwich, and her father Peter Simson (37) said it was just a part of his daughter's very sassy personality. 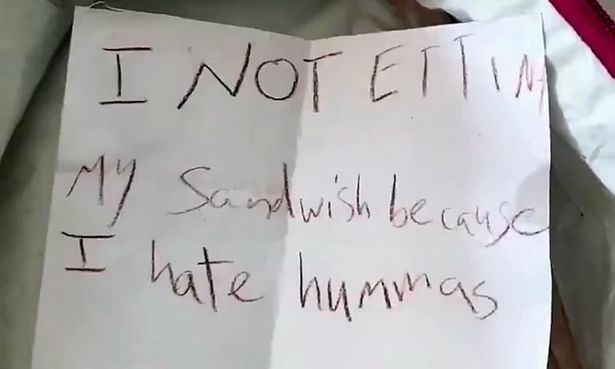 Peter opened Pearl's lunchbox to make her the next day's meal. Instead, he found a note inside addressed to "DAD." Inside, the note read "I NOT Etting my sandwish because I hate hummas". Pete thought this was hilarious, later commenting "Well clearly, she wasn’t a fan of the sandwich I made her. I asked her if she liked her packed lunch and she told me there was a note in the lunchbox."

He was amazed and horrified at his daughter's brazen attitude. "I thought it might be a thank you or something but as soon as I saw the dishevelled sarnie in there I knew something was amiss," said Peter, "The dark brown pencil it was written with should have been a clue, it was a foreboding color." According to the family, this was a very typical thing for Pearl to do.